Mariniersmuseum: Unit in Uruzgan (Museum of the Dutch Marinecorps)

The semi-permanent exhibit Eenheid in Uruzgan (Unit in Uruzgan) in the Mariniersmuseum in Rotterdam was conceived as a place of reflection about the human costs of the Dutch mission in Afghanistan. Studio Louter created four compelling —occasionally dramatic— films and Todd van Hulzen conceived of a simple plan to focus devotion and consciousness onto various themed clusters.

This project seems particularly suited to the display approach which we call “Relic and Altar”. The object itself, or “Relic” is in such a case usually insignificant visually or formally, but rather loaded with meaning due to its direct association with a remarkable event or person; say, Napoleon’s tooth. Depending on the association these objects can take on a sacral air, but only when given the proper context. The “altar” in this case is that context and usually consists of non-museum imagery, i.e. reproduction photographs or audiovisual content, but can also be original paintings or other objects that describe the narrative behind the displayed “relic”. The Relic represents thus the contact with the Authentic, while the Altar represents the story of events.

In the case of Eenheid in Uruzgan we conceived of flat, floating elements for the imagery and text (the altars) and of simple glass cases for the objects. One object was a small motorcycle “collected” from an Afghan assailant and afterwards much used for letting off steam in the military compound. This was placed on the floor protected by a simple metal fence with its “altar” behind it, a semi-transparent projection screen floating against a wall of Hesco deployment barriers. Here we projected a moving film about stress and vulnerabilty.

For the rest we employed much Hesco material (accordeon gabions of steel wire and textile which are deployed as sand-filled entrenchments) to establish a relevant texture without becoming akitsch recreation. The text and graphics were printed on fabric and mounted in suspended aluminum frames. Other text and imagery were hung on back-lit units detached from the walls to create a hovering effect. The overall impression was one of glimmering light, open perspective and hope. Nothing was superfluous. 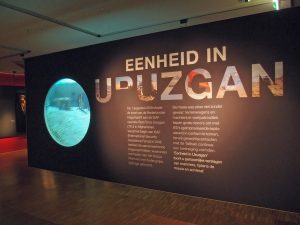 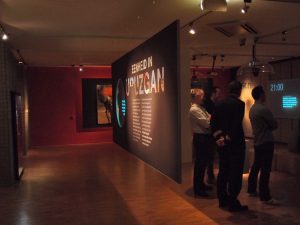 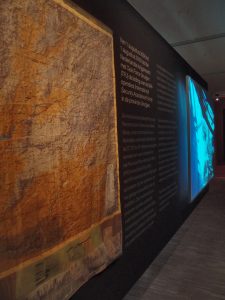 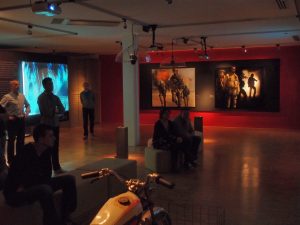 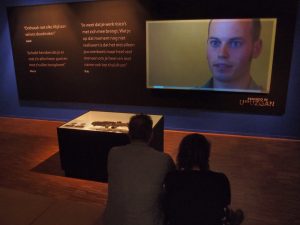 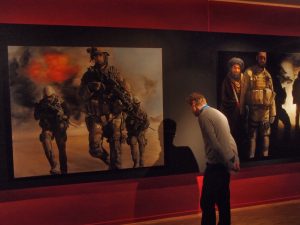 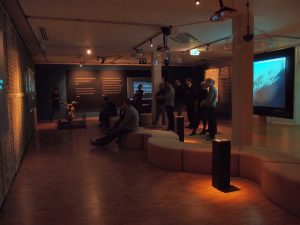 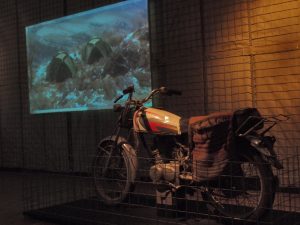 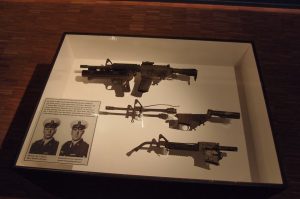 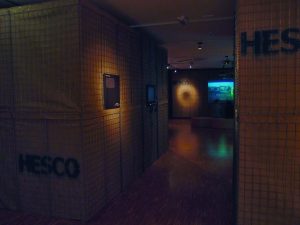 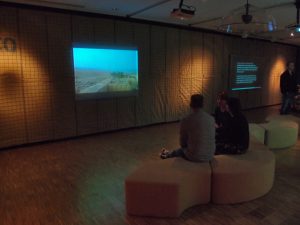 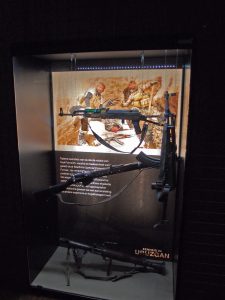 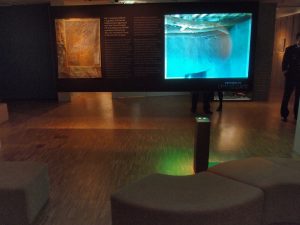 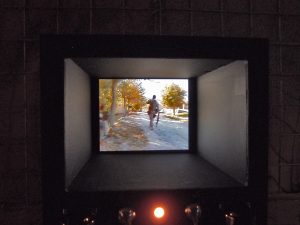 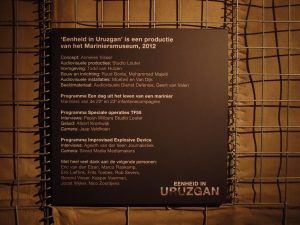