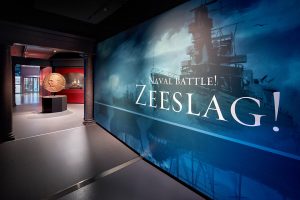 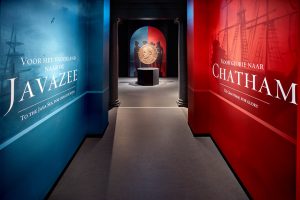 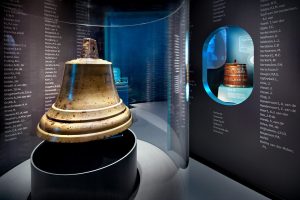 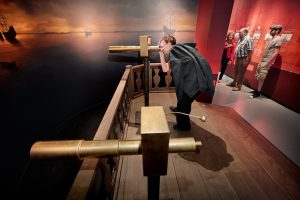 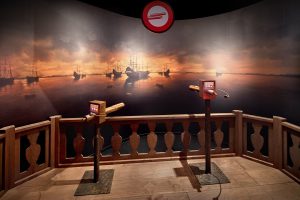 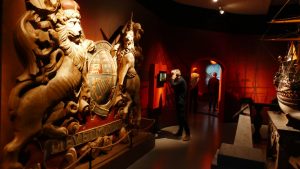 The fate of the seaman is never certain. Will it be victory or defeat? One admiral ascends to national Valhalla, the other is to be commemorated for his vain valor. The sailors and marines have little choice but to follow the leader. Zeeslag/Naval Battle explores the unpredictable chances for valor or defeat through the eyes of average seamen during two famous sea battles. Todd van Hulzen Design and Studio Louter created a clear dichotomized concept with an accent on the element of fate. Todd van Hulzen produced the architecture,the styling, and —with Studio Louter and the illustrator Hisko Hulsing— more than 700 square meters in graphic printwork. The show opens onto a central ‘rotonda’ on which a two sided coin spins eternally, as it were, one with the head of victory and one with the head of defeat. This represents the uncertain lot of a navy man. The first of the battles was the Battle of Chatham, otherwise known in English as the Raid on the Medway. This was a daring and brash raid on the English fleet moored in the mouth of the Thames during the Second Anglo-Dutch war 1667. The Dutch warships, under the national hero Admiral Michiel de Ruyter, burned the English armada in its home port, seized the crown ship the Royal Charles, and towed her back to Holland as bounty. (Note: Todd van Hulzen also made on request a  replica of the ship’s sculpted stern for the film Michiel de Ruyter. See below.) This exhibition includes 4 action experiences, all heroic and kid-friendly, including a shooting canon and a rowboat. We wrap it up with a chamber devoted to “glory”, that ambiguous historic creation. The second battle, one also for the history books, was the disastrous defeat of the Dutch fleet, along with the ships of several allies, in the Java Sea at the hands of the Japanese Imperial Navy during World War II. The Commander of the allied campaign, rear-admiral Karel Doorman, perished in the campaign and the defeat resulted in the Japanese occupation of the entire Dutch East Indies, now Indonesia. This exhibition required much more tact and subtlety. It is more an homage on the brave men who, mostly, perished in this battle. It ends in a space devoted to those names.
PrevPreviousVideo walkthrough of Zeeslag!/Naval Battle!
Next4 visions of Dutch prehistoryNext
Categories: EXHIBIT DESIGNMuseums
Tags: Marinemuseumportfolio exhibits