In 2016 the Amsterdam daily newspaper Het Parool began a conversation about the city’s central square, the Dam, or “Dam Square” as tour guides call it. Originally built as a proper dam in the Amstel River giving the medieval town a bridge and diverting water into its moats, The Dam has always been the navel and namesake of the city. But was its current form not too haphazard? Wasn’t it time for a redesign? Many people furiously defended its current state, the product of many historic turns and a fair amount of amateur fiddling from those in power. Others thought that too much of its “design” had been left to chance, or even worse, disregard. Todd van Hulzen threw his hat in the ring and sent in a proposal. Now, a few years later, the historian and author Fred Feddes (A Millennium of Amsterdam: Spatial History of a Marvelous City) has written a book about the Dam. He has included Todd’s design drawing among the illustrations.

What is distinct in this design proposal is the placement of the National Monument—a circular stepped parvis topped by a rounded obelisk and a travertine backdrop—into the center of the Dam as opposed to its current location at the shadowy end of the square. Doing this achieves two ends: it allows the creation of two separate squares, one grand and ceremonial, the other green and convivial.

Secondly it places the obelisk at the vertices, or axial node, of the two approaching boulevards, the Damrak and the Rokin. What you achieve here is what great city planners have been doing for centuries, placing a landmark (the Washington Monument, the Place de la Concorde) as the visible destination feature of a given point of departure. In this case the National Monument, which could be arguably called the Umbilicus Urbis of all the Netherlands, is no longer shunted out of the way as a potential nuisance to the automobile, but is 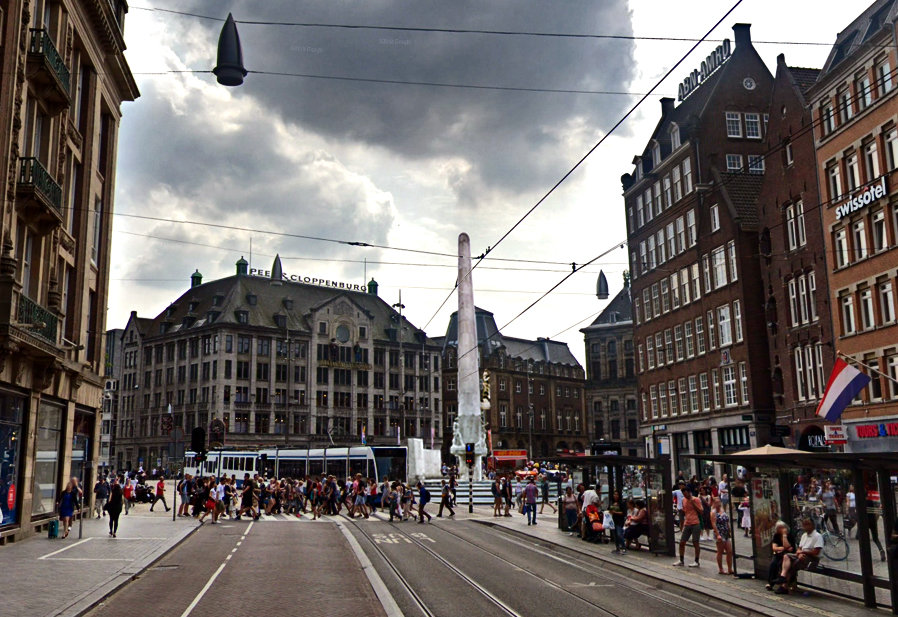 given its due importance and dominance on the capitol’s central square, and is visible from as far away as the Central Station and the Spui. The square that remains to the west becomes a space with understandable definitions, described by the three national repositories of identity: The New Church, The Royal Palace, The National Monument. The square that is created on the east side, which we could redub “Vijgendam” as it once was, now has room to become the national living room, with opportunities to linger and perhaps sit on a terrace in the shade of trees.

I propose one last intervention. The monument, which should enjoy the regard  due to a national altar, suffers daily from the indignities of tourists sitting on it, climbing on it, or even worse. Ceremonial wreaths that are hung on it become vulnerable to accidents or foul play. I suggest the creation of a protective barrier around the monument in the form of a narrow circular channel of water. This is both a moat and a fountain, practical and decorative. It is like Dante’s bel fiumicello protecting the castle of the virtuous ancients. It is a symbolic river of the Netherlands delineating the holy precinct. Perhaps spigots under each of the arms of the provinces on the round wall will feed this basin. On Memorial Day a bridge is laid for the ceremonies. 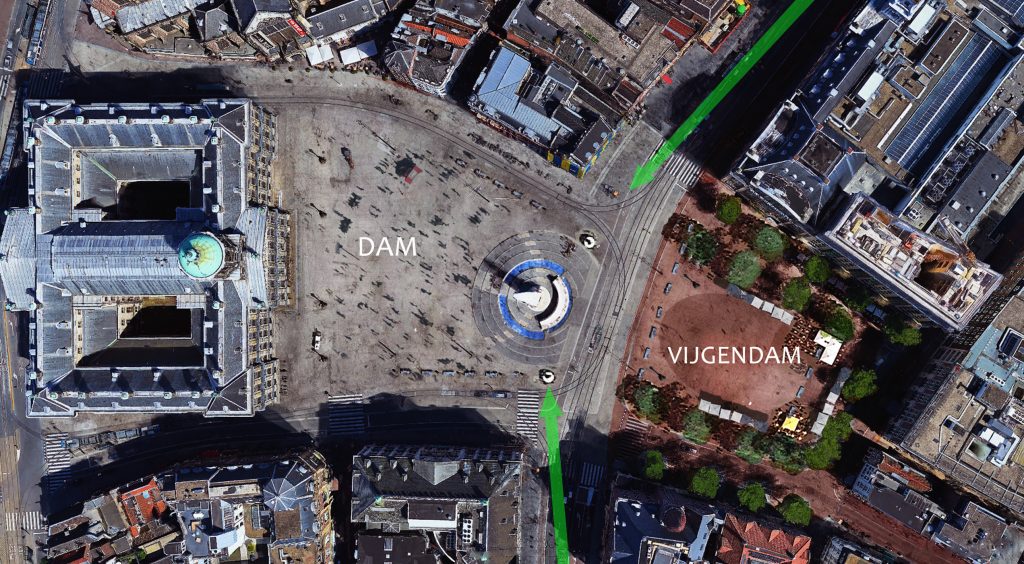 Here is the first part of a two pronged project in Almere, the design of an exhibition space and an invitation to be one of the artists in the exhibition. Almere is a medium large Read more…