My immersive installation “Black Eden” is open in the pop-up annex of M. Museum, in Almere. Black Eden which alternatively could be called “Carbon Garden”, is about cognitive dissonance in a scorched paradise. It’s a comment on human self image and ecology.

Museum M. is making its mark by orienting itself towards immersive and landscape installations (Land art). To this end they’ve built a pavilion at the world horiticultural expo Floriade, and are starting to assert their presence in the city center. Five artists were invited to create five walk through —that is immersive— art installations in a former commericial space in the city center. The themes of the Floriade —the future and nature— carried through into the themes of the installations, inasmuch that “immersive art” can be narrative. My installation is also about the past, and the damage we’ve done, which makes the future so daunting.

Black Eden is an immersion in human vanity and folie, namely ecological depredation as seen through the lens of humanity’s self-mythologizing and its aesthetics. Humans see themselves as the centerpiece of paradise, but nature itself, long suffering, is indifferent. Black Eden touches on the Rococo, forest fires, iconoclast fury, Enlightenment vainglory, and more.

The silhouetted forest of rococo forms, related to my work with paper cuts, is made of cut wooden panels, scorched into coal. It smells of a recently burnt forest. The backdrop, an assemblage of 18th century iconographic prints, is defaced with charcoal in a bit of anti-aesthetic violence.

Until October at Citadel 22, Almere

Commissions come in all shapes and sizes. Additionally, the emotional teneur can vary quite a lot. Recently I’ve made two small paper-cuts that have served Read more…

From the category “things I forgot to post”: looking back on some great drawings and models from a commissioned remodel-concept for a medieval castle from Read more… 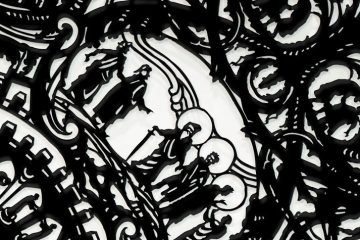 As a young man I lived in Rome. I learned Italian as one would —being before the time that speaking English was self-evident— and immersed Read more…